In today’s fortnightly dev log: a bit of information on the next update for The Red Market, and the strange new monster that update will bring.

Hi! Long time no see, right? Sorry about that. I took the first two weeks of January off, and probably should have mentioned exactly how long I’d be away. But I’ve been hard at work these last two weeks, and we’re nearly there on the next big content update for The Red Market. So let’s talk about that for a bit…

The bishop-fish, as featured in Johann Zahn’s 1696 work Specula physico-mathematico-historica notabilium ac mirabilium sciendorum. Truly one of the underappreciated classics of 1696 Speculative Zoology.

The next update will bring a new monster for you to hunt down: the Bishop-fish! Loosely based on the real-world mythological Bishop-fish, this disconcerting mix of human and fish parts was one of my favourite things to write in The Red Market so far:

“Then, slowly, a small form crests the surface of the water and you find yourself eye-to-eye with a man’s face. Or rather, a fish. Or rather, a fish with the eyes and face of a man. Its mouth is below the water, murmuring silently.

A fin moves, articulating in parts like the digits of a hand.”

The Bishop-fish is also kind of a mission statement on what I want the game as a whole to be: a set of simple game mechanics hiding countless little secrets. You can find the Bishop-fish, bring it home, then sell it off for a profit quite quickly and easily. But dig a little deeper and you’ll find loads of extra things to do with this horrible little monster.

Hiding Secrets In Your Game:

One of the big things I’m trying to do with The Red Market is make secrets actually secret. That’s kind of tricky to do in a (non-parser) text-based game.

In a traditional graphical game you can make secret areas, or have mechanics interact in cool, unexplained ways.

In a parser-based game (i.e. games where you type out what you want to do, rather than select from pre-written options) it’s similarly easy to hide secrets for the player to find: if the player never thinks to ‘USE MAGIC KEY ON TABLE’ not only will they never see all the amazing magic-key-on-table content you wrote, but they won’t even know it exists.

But with choice-based games (like The Red Market) where everything the player can do is visible as a selectable option, it’s much harder to make things secret. If the player sees the giant button labelled ‘USE MAGIC KEY ON TABLE’, they’ll immediately think “Well, I guess something happens if you use the magic key on the table for some reason.” What happens when you use the magic key on the table may still be interesting, or funny, or useful, but it’s no longer surprising.

More good pictures for you to enjoy.

There are plenty of tricks to make secrets actually secret in choice-based games, but one of the things I’m trying to do is to give player a bunch of default always-available options, and hide the interesting secrets behind those options.

Say the player has the magic key in their inventory. Instead of a ‘USE MAGIC KEY ON TABLE’ option appearing whenever they approach the table while holding the magic key, there’s an option called ‘USE AN ITEM’ that allows them to select from any item they’re currently holding, even if using it on the table does literally nothing. This option appears any time they approach any object in the game, so instead of immediately being shown exactly what they can do, the player has to think: “Which of my items might be useful right now?”

Suddenly ‘USE MAGIC KEY ON TABLE’ becomes something the player will only do if they heard about the magic table from the wizard in the previous dungeon, or they remember that the person who gave them the key mentioned something about tables, or they just get a really good hunch. 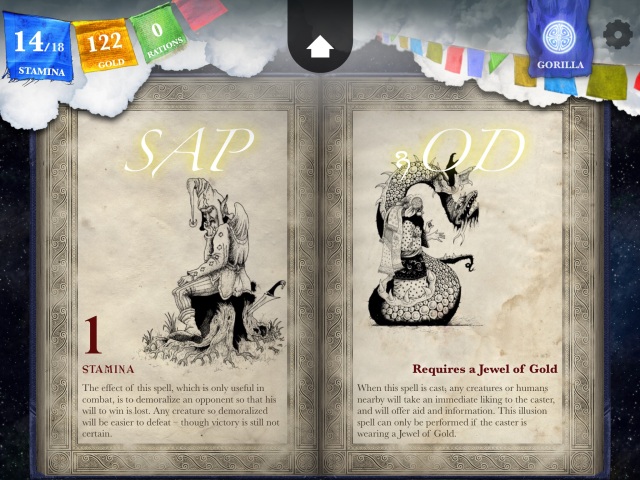 Inkle’s wonderful Sorcery! series of games does this so well. By giving you dozens of spells, and then allowing you to select which ones to use in a given situation, it means the player is constantly thinking ‘which of my spells would be useful right now?’, which allows for both rewarding creative thinking on the part of the player, and lots of fun little secrets to discover.

Maybe casting a fireball opens a hidden passageway. Maybe casting ‘speak with animals’ will allow you to talk down the angry snake. You’ll never know until you try. And suddenly the world feels alive with possibilities, and you feel creative and smart and devilishly good-looking for finding them.

Hopefully The Red Market manages to capture some of this same magic. It’s a game built from the ground up to be about finding secrets. Sometimes just to see something cool, and sometimes because those secrets can be exploited to your advantage. The ‘replay the game several times, steadily building up knowledge of how to turn every situation to your advantage’ mechanic that will eventually be included is also very important to this sense of secrets hiding just beneath the surface. (and is also lifted almost wholesale from Inkle’s incredible Sorcery 2, as it happens)

A third and final picture of these good wholesome animal-men.

I’ll talk about that time-rewind mechanic in more detail in a later post, as this one is already far too long. Next time, though, we should be talking about the Bishop-fish update in a bit more detail. That update should (barring death or other disaster) be launching in two weeks.

(And remember, you can follow me on the dystopian hellsite Twitter by clicking here. The current early version of The Red Market can be played online here, if you haven’t already.)

This entry was posted in My Games, The Red Market. Bookmark the permalink.