(Welcome to part ten of our mini-series on Vampyr. If you missed part one, you can find it here. Today we’ll be heading down into the sewers, fighting a big punchy man, and questioning the judgement of God.)

It’s time to head down into ever gamer’s favourite environment – one full of beautiful vistas and countless opportunities for interesting, varied level design – a sewer!

Mercifully, Vampyr doesn’t make us punch giant rats or navigate a labyrinth of identical brown corridors. It’s a quick jaunt, with one ‘puzzle’ (open and close some sewer grates in the correct sequence, because video games), and we soon run into something pretty interesting: the Big Grey Man me met before, only now he’s absolutely going to town on some Skals.

After crushing the heads of a few Skals like so many delicious grapes, he – the subtitles call him ‘Fergal’, which, okay, I guess that’s his name now, maybe I missed when they told me – tells us that he’s here to eradicate the Skals on behalf of the Ascalon Club. Reid tells him off a bit, and then Fergal decides to kill us for reasons.

He says, before crushing the heads of a few more Skals like so many delicious maggots.

What can I say? It’s a Vampyr boss fight, so all the complaints I’ve made before are still in play. We dodge around. We get caught in some janky attack animations. There’s an approximately 70% chance we die a couple of times, and an approximately 1000% chance that I get annoyed and raise my voice at a loading screen. But it’s fine. It’s fine. Eventually Big Grey Fergal dies, and I’m left thinking ‘Oh, I guess he’s not going to end up being a major character, then.’

Tramping through the sewers some more, we discover a group of peaceful, talkative Skals living in the sewers. That’s right – apparently Skals are not always feral, flesh-eating beasts. I mean, these ones still eat human flesh, but it’s still an improvement.

Most of the Skals hanging around the sewers are of the ‘repeat the same two voice lines whenever you walk past them’ variety of NPCs. There’s only one we can properly talk to, which feels like a huge missed opportunity in a game about talking to interesting NPCs.

We meet a mysterious, scarred woman – seemingly the leader of these Skals – who goes by ‘Old Bridget’. She tells us a little about the Ascalon Club (they’re the upper echelons of vampire society – think ‘Vampire Tories’), and its relationship with the Skals (they see Skals as lesser beings fit only for slavery or extinction – remember: ‘Vampire Tories’).

She also also tells us that Harriet Jones – whom we thought murdered by Hampton – is in fact alive. For whatever reason, she turned undead at Pembroke, and Hampton brought her here to live with the sewer Skals.

I said alive before. What I really meant was: ‘alive’. We find Harriet, and find her looking very strange. Her flesh is twisted, and her body is bloated to all hell – to the point where Old Bridget isn’t fully convinced she’s even a Skal. No one really seems to know what’s going on with her, or what’s the cause of her strange mutations (THIS DEFINITELY WON’T BE MASSIVELY IMPORTANT LATER).

But two things are clear about Harriet Jones – she’s full of overwhelming bitterness and hatred for basically everyone, and she’s definitely killed at least one person. That murdered man in the docks was her work – an old grudge of hers. Turns out Hampton brought her here to the sewers as much to protect the world from her, as to protect her from the world.

She also says something very disconcerting – apparently she was visited by some kind of shadowy presence – one ‘born of hatred’, that spoke only to her, and that asked after us (Dr. Reid, that is) specifically (THIS DEFINITELY WON’T BE MASSIVELY IMPORTANT LATER LOL).

Harriet is quickly exhausted by all this exposition, and we leave her to rest. And now that we know the truth about Sean Hampton – i.e. that he didn’t kill anyone – it’s time to head back and absolve him of our suspicions.

When we do so, we find him sitting at his table eating raw human flesh with a knife and fork. Okay then…

Well, we already knew that as a Skal Hampton has to eat human flesh, and that he only eats the flesh of the already dead. But Reid is (I have to say, justifiably) worried that Hampton will one day cross the line, succumb to his hungers, and actually kill someone.

So, much like with Nurse Crane (RIP, deffo not my fault), we now have a choice. We can spare his life or kill him, or we can ‘Turn’ him. Not into an Ekon like us, but we’ve just learned from Old Bridget that vampire/Ekon blood can sustain a Skal, removing their need to eat flesh entirely.

This is a really cool choice, because I (and I expect a hell of a lot of other players) got burned by the Nurse Crane choice. The option I chose there was also coloured blue – an indication that it was unlocked by collecting Hints about the character (and basically presented as ‘click this option to win’). Choosing the option that seems obviously correct with Nurse Crane ended up screwing me over big time, and so naturally I was suspicious that the same thing would happen here. 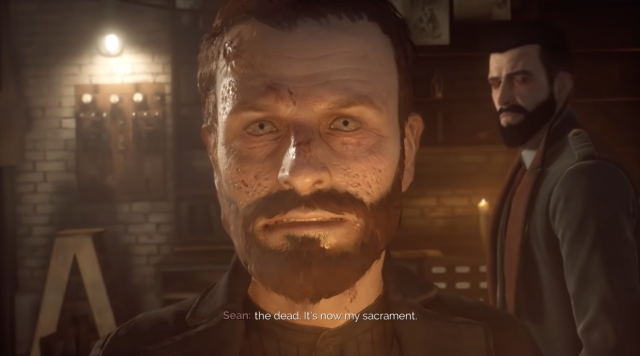 More very weird vampire eyes that no one notices somehow.

And the game knows that. It’s an obvious attempt to make the player feel nervous and unsteady about their choice, and it works fantastically. So fantastically, in fact, that I’m almost willing to forgive the game’s missteps with the Nurse Crane choice, since it’s what allows this choice to work so well:

Mess with your players’ expectations and make them doubt their choices.

If they player knows they’re making a fraught choice, they’ll probably care about it, wring their hands over it, and be more willing to accept a negative outcome. If they feel like they’re making a normal choice, then you suddenly screw them over, they’ll just feel annoyed and betrayed (even though, yes, sometimes real life does just screw you over with no warning). 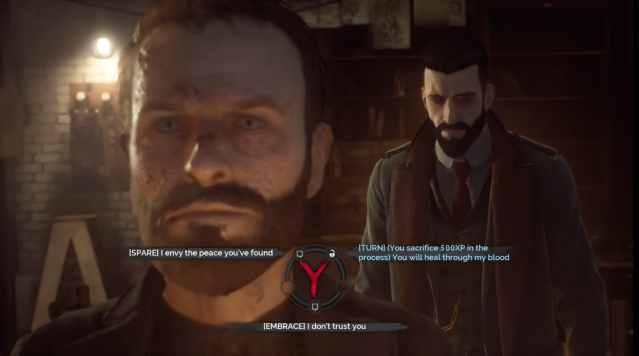 I eventually choose – against my better judgement, as I’m pretty sure it’s too good to be true – to give him my blood. I don’t think he’s lying about not killing people, but I am scared that he’ll one day succumb to the cravings and snap.

But Hampton is really not into it. He says God made him this way, so going through with this plan would be against God’s will. Reid (without any input from us – we’ve shit out bed and now have to sleep in it) begins to strong-arm Hampton. Hard. He questions his trust in God’s plan, using the facts we learned about Hampton earlier as ammunition.

How can he trust God’s plan when he was abandoned as a baby. Was it God’s plan for him to be molested by a priest as a child?

It feels incredibly icky, but that’s the point, and it works perfectly in the moment – Reid is being manipulative, and downright awful here. Which is entirely in-keeping with his ‘I’m very nice, but I retain my birthright privilege to tear you down at the drop of a hat if I deem it necessary’ posh, upper-class character, and the manipulative nature of every vampire we’ve met (or will meet in the future).

And we don’t really ‘convince’ Sean Hampton with all this – we merely target where he’s emotionally vulnerable, and proceed to pummel him there until he’s unable to stand up to any more. And after using his own personal trauma against him in the name of making him do something he desperately doesn’t want to do (but that we’ve decided, in our doctorly magnanimity, is best for him), he stops fighting back, kneels down, and drinks our blood. We win.

In my defence, I now hate myself.

So, uh…yeah. Next week we’ll be continuing our investigation into the epidemic, and I’ll be trying to forget what we just did here.