The Eurogamer Expo 2013: The Show Floor

Now, without further dithering, here are my thoughts on some of my favourite games of the show:

Myriad took me completely by surprise. A twin-stick shooter, it quickly distinguishes itself from others in the crowded genre in two main ways: (1) visually, it’s like nothing you’ve ever seen – all pastel colours and chaotic exploding shapes, and (2) You don’t just move around, shooting at enemies. You can also take control of enemies and parts of the environment, moving them around the screen to relocate dangers, shift obstacles, and more.

It’s a little hard to explain, partly because I found it so hard to get to grips with. The visual style makes the action pretty difficult to parse sometimes, and the game explains exactly nothing to the player. Watch the video above if you want to make things (only a little) clearer.

I’d have to spend a couple of hours really learning how Myriad works, but there were a few things that stood out to me right away. First, I loved the constraints the game places on movement. You can only move out of the colour you occupy for a few seconds at a time. This forces you to make smart decisions about where and when you’ll move, instead of flailing around the entire screen to avoid enemies. Second, moving enemies and shapes around opens up a huge possibility space during play. Again, the game is so abstruse that it’s kind of hard to explain. Third, the way shapes and colours explode across the screen isn’t just an aesthetic flourish – because your movement is so affected by the placement of those shapes and colours it drastically alters the way you play on a  second-to-second basis. 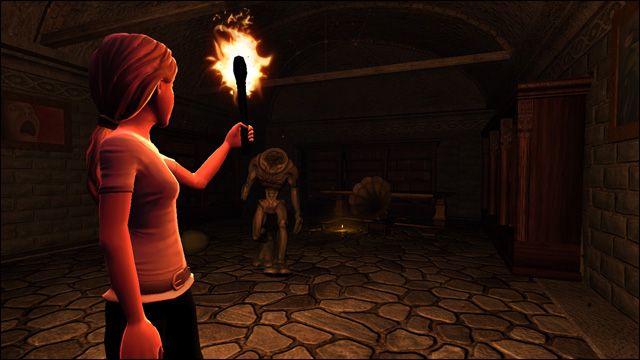 First off, Tomb of Rooms is not a good name. It’s an amazing name, obviously. It’s probably the best name I’ve ever seen. Tomb of Rooms. Tomb of Rooms. It’s both redundant and gloriously unevocative. It tells you all you need to know and so much less.

Anyway, Tomb of Rooms is actually pretty damn good: it;s a 1-2 player game of exploring and ascending a procedurally generated dungeon/tower/tomb of rooms. It’s at quite an early stage at the moment, but it’s already got a hell of a lot of potential. I’m also fairly sure that the name is a joke. It might not be.

So far, at least, it’s extremely simple. You walk around a bunch of procedurally generated rooms, always trying to reach the next floor. You might find items, such as a flashlight, or a one-shot, searingly loud rifle. You might encounter traps. At one point I turned a corner to see a creature with spindly limbs and even more spindly fingers walking slowly eversoslowly towards me, its hand outstretched. I sat there, stunned and horrified for a second before sprinting away and shooting it in what can charitably be called its head.

There are some lovely touches throughout. The switch from third to first person when aiming the rifle feels instantly claustrophobic, and the lack of weapon crosshairs, combined with the extremely long reload times, makes every pull of the trigger feel impossibly tense.

My favourite touch is the ability to draw on the walls in chalk. I used this to mark doorways I’d been through to avoid becoming lost. I suspected that others used chalk to draw a giant cock, and according to the developers literally the first person who played the game did indeed draw a giant cock.

One last thought: there are unnerving portraits throughout the dungeon – a woman smudged by blood, an open-mouthed screaming face, and so on. And while they were reused over and over again across the procedurally-generated levels, that repetition kind of worked for the creepy vibe the game’s going for. Because here you are in a place where someone or something has seen fit to display their collection of dozens of identical paintings of the same screaming face.

Tomb of Rooms should be entering some form of early access in the next couple of months, and I’m excited to see where the developers take it. I really, genuinely hope they don’t change the name. 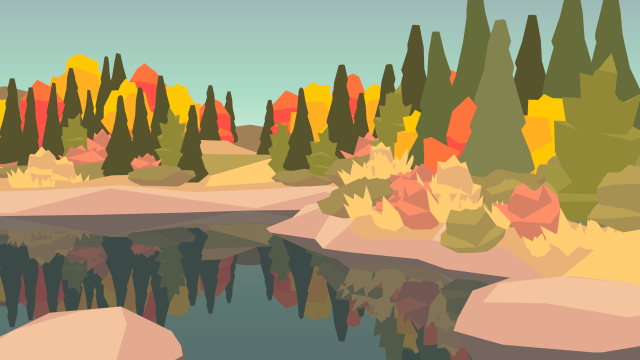 Skipping Stones has a very simple premise: you look out and skim stones across the water. Each time a stone hits the water it generates a musical note. As time passes poetry fades in and out on screen. Over time we edge from morning to afternoon, to twilight, and to nightfall, watching the colours and the lights of nature changing.

It’s a restrained experience, though the developer told me that the full game allows players to explore the landscape a little before settling down at one of a few bodies of waters to skim stones.

It reminded me of Proteus, in the sense that it consists of little more than quietly observing nature. But like Proteus its portrayal of nature is absolutely gorgeous, and sometimes downright mesmerising. The skipping stones is somewhat uninvolved, and the poetry ranges from gently touching to gently mediocre, but as a whole Skipping Stones was a charming, relaxing experience. There wasn’t a great deal to do, but I didn’t really need anything to do. It was quite nice to just sit there, watching the world turn.

Speaking of worlds turning (yup), here’s my game of the show. MirrorMoon EP is already out, so once you’re through reading this go away and buy it.

MirrorMoon EP s one of those rare, astonishing games where nearly every moment is a moment of discovery. It teaches you nothing. You start off facing a mysterious control panel, the function and purpose of which are unknown. You start pressing buttons and flipping switches at random, and things come alive. Obviously you press the big red button first, because it’s a big red button and it lives to be blindly pressed for no good reason. When you’ve finally got things working you find yourself on the surface of a small planet, at night, with a huge moon in the sky. Again, you’re not told what to do, but again you quickly, silently begin to find out.

You have a tool that lets you interact with that moon, and you start to see that the moon and the planet you’re standing on are linked in strange ways. You rotate the moon, you move it across the sky, you fire beacons of light onto its surface.

Describing what happened in the demo would be to destroy much of its wonder. This is a game about doing something and discovering what you just did. It’s a game about suddenly seeing something wonderful happen, and just sitting there in awe for a second.

Like many puzzle games, MirrorMoon EP asks you to solve puzzles based on weird dream logic. Its physics is not our physics. Your actions will have impossible consequences, and you’ll need to do things that aren’t just odd, but that don’t make any sense to the uninitiated. Most games that do this suffer as a result – they have something of that sense of wonder, sure, but often it gets overwhelmed by that sense of ‘What am I supposed to be doing?’. One of the things that’s so impressive about MirrorMoon EP is that, unlike all these other games, here the weird dream logic just makes sense. Without words or instruction you piece together what you’re supposed to do based on simple experimentation. You do one thing, then you do another, and then another, all because they make sense as a logical progression of your actions and exploration in an illogical, impossible world. That’s an incredible thing for a game to do; surprise you time and time again with strange, otherworldly occurrences, but allow you to seamlessly make progress without any need for explanation.

My experience didn’t leave me thinking of it as a game about puzzles, but instead a game about discovery, and awe – about interacting with unnatural things and, not quite coming to understand how they work, but coming to understand that they work. Seeing a simple red planet and its moon unravelling into so much more, seamlessly, in front of your eyes. All with a sense of wonder in your heart, like a child seeing an eclipse for the first time, or a baby learning what a cat is. My god I want to play more.

This entry was posted in Games Blather. Bookmark the permalink.