With press pass clutched in my tiny sweet-stained hands, I somehow found my way to Birmingham for this year’s Rezzed – the UK’s foremost PC and Indie games show. Due to travel concerns and a promise to my mum that I wouldn’t tire myself out, I only attended one day out of two, so I didn’t get quite as much time to look around as last year. But what I did see left a very good impression about me, and you can read about it here:

I was a worried that this year’s Rezzed – moved from the cosy smallness of Brighton to a huge conference centre on the outskirts of Birmingham – would have lost its way. With any event of this kind there’s a risk that success and growth will cause it to lose part of what made it special the first time around. And the first Rezzed was special, in large part, because of the atmosphere it gave off: it felt like a friendly, informal place filled with friendly, informal people. There were no bright lights or loud, booming noises announcing the presence of the fifth installation of the world’s largest franchise. There were big names, sure, but they seemed almost pushed to the side in favour of the small and the weird.

I wasn’t afraid of Rezzed turning into Rezzed: Selling Out, but there was a fear that things wouldn’t be quite the same this time around.  It was still, at heart, an Indie and PC games show, so I knew it wasn’t going to be too different. But while I was looking forward to another Rezzed, I was preparing myself for new problems; more people, more noise, hour-long lines, and a bigger emphasis on the heavy hitters over indies. Not exactly full to the brim with booth babes and faceless PR reps, but an indentifiable lean towards the bluster and the blather of events like the Eurogamer Expo, E3, and Gamescom.

Fortunately, I was wrong. It may have been located in the cavernous bowels of the National Exhibition Centre, but Rezzed still felt like the friendly, informal get-together I fell in love with last year.

I would have been happy just to announce that it was much the same as last year, but it turned out to be even better. Sure, there were longer lines in a lot of places, culminating in a good fifty minutes spent waiting to play Sir, You Are Being Hunted. And the Leftfield Collection – the area packed with the tiniest, often most interesting games on the floor – got far too little space, and as a result became a solid wall of bodies throughout the day. But that, really, was it.

There were a few big names, like Total War: Rome 2, Planetside 2, Splinter Cell: Blacklist, and Company of Heroes 2, and almost all of them (perhaps excluding Splinter Cell) fit wonderfully with the PC-based nature of Rezzed, showcasing as they did some of the unique strengths of the PC as a platform. And it never felt like these bigger games were dominating the show floor. In fact, Splinter Cell and Company of Heroes in particular seemed almost sidelined; pushed to the outskirts in an unflashy, underpopulated 18+ area.

Note: though I didn’t make time to play it myself, I was informed by several people that Hotline Miami 2: Wrong Number contained some pretty distressing, triggering scenes of sexual violence. It was probably a mistake to show it outside the 18+ section, and hopefully next year such oversights won’t be repeated

Like last year, the show was dominated by the indies; their passion, their new ideas, and their sometimes questionable facial hair. But while last year’s show was similarly filled with brilliant indie games, what was so impressive this year was the sheer variety of games on offer.

As I was leaving at the end of the day a thought hit me: “I cycled between games for six straight hours and I didn’t shoot a gun once”. That thought was followed almost immediately by: “Okay, sure, I guess I hit a robot with an axe” and then “Actually, I did order a Space Marine to shoot a bunch of Genestealers” but you get the point. Rezzed was awash with variety: Surgeon Simulator 2013’s slapstick bodyhorror, Gone Home’s quiet, rich exploration, the social media anxiety simulator that was the delightful Redshirt. I could go on, and I will: Prison Architect was Dwarf Fortress by way of the prison-industrial complex, That Dragon, Cancer was a short game about coping with a child who has cancer, and Sir, You are Being Hunted was a Stalker-esque roguelike where robot dandies hunt you through a procedurally generated English countryside.

It was wonderful to attend an expo where both Total War: Rome 2 and That Dragon, Cancer can coexist, and it was especially wonderful to go the whole day without hearing some asshole sigh theatrically, push his glasses up the bridge of his nose, and proclaim “Well, it’s not really a game though, is it?”. I’m sure there was at least one guy walking around in a state of constant fury that all these self-important ‘non-games’ were polluting true gamer culture, but everyone I saw seemed to be pretty happy to embrace the wide-open spectrum of experiences on offer. 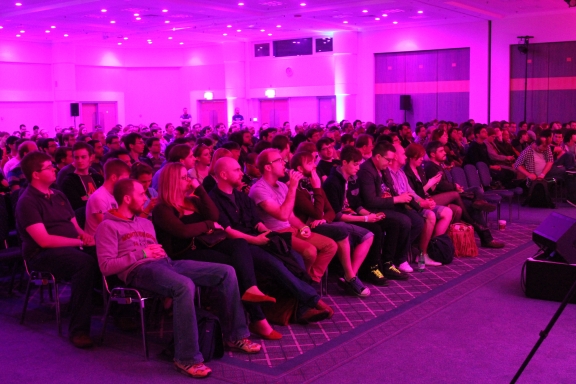 I’ll put up another article at a later date where I talk about the games on the show floor that really stood out to me, but right now I’ll finish by telling you about something heartening that happened at one of the panels, and then I’ll mention my game of the show.

So: I only went to two of the day’s panels, including the roundtable titled “How can new business models improve PC gaming?”. It was a fairly interesting talk, albeit occasionally veering into “We are doing X and X is the only plausible way of doing things” territory. You can watch it (alongside all the other panels) here. The moment that stuck out to me came right at the beginning, though:

Now, that could just be seen as a good joke (and it was a good joke), but it was also a clear case of shots being fired. Rock Paper Shotgun, above all the other major games sites I know, has been active in attacking the waves of misogynistic, transphobic, racist hatred that regularly wash against the shores of the internet, and the online games community in particular. That joke, starting off the very first event of the entire two-day show, seemed to me to be a gentle but firm insistence on the part of John Walker, Rock Paper Shotgun, and Rezzed as a whole that none of that hatred is welcome there. That Rezzed is for everyone; that everyone is welcome to come and join in, so long as they leave their hateful behaviour and opinions at home.

There’s a long, long way to go before we can get close to genuinely making games, and gaming culture, open and welcoming to everyone. When I read articles about the sexism that regularly slips under (and sometimes over) the radar at expos like E3 and GDC I lose almost all the hope I have that things will get better. The same thing happens when I see one of the Penny Arcade guys once again deliberately insulting rape survivors, or trans people. Or when a hundred other things happen routinely on the internet, or in the real world.

There honestly aren’t many ups. But Rezzed, while certainly not perfect, felt like a definitely step forward. It wasn’t just that one joke – it was the diverse, if not exactly heterogeneous, audience. It was the friendly atmosphere. It was the presence of Gone Home and Redshirt in the same space as Planetside 2 and Total War: Rome 2. I’d like to see more of this, and hopefully Rezzed will keep improving, and keep delivering.

Okay, I’m done now. Rezzed was brilliant. I walked around and stood around gawping at computer monitors a lot. At the end of the day I had a bit of a headache. Around halfway through the day my knees started to hurt. I plan to go and cover it again next year. I’m sure that will be ace as well.

Anyway, here’s my Game of the Year: Gone Home, by the Fullbright Company (With Big Robot’s Sir, You Are Being Hunted taking a close second place). Expect to hear more about these two games, and many more, in a future article, but in the meantime you can learn more about Gone Home here.

Photos of Rezzed from Eurogamer.net

This entry was posted in Games Blather and tagged Expos, Gone Home, Rezzed, Sir, You Are Being Hunted. Bookmark the permalink.