(In part eight of our 2018: The Year in Books series, we look at first love, and everything it has to answer for.)

Julian Barnes – The Only Story 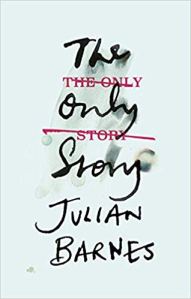 My god, Julian Barnes has had a cracking few years (seven counts as a few). 2011 – The Sense of an Ending, the very deserving winner of the Booker Prize. 2013 – Levels of Life, a wonderfully inventive semi-non-fiction book dealing with the death of his wife. 2016 – The Noise of Time, another brilliant novel, this time following the life of Russian composer Dmitri Shostakovich, and the regret that comes with failing to do the moral – but dangerous – thing. And now 2018 – The Only Story: first love, and its lifelong consequences. Strap yourself in – this book is really something.

‘Most of us have only one story to tell. I don’t mean that only one thing happens to us in our lives: there are countless events, which we turn into countless stories. But there’s only one that matters, only one finally worth telling. This is mine.’

Paul is a teenager on the cusp of university. He meets an older, married woman – Susan – and they quickly become lovers. Immediately we’re set up for a love story – a ‘lovers in a disapproving world’ story. And we get it, but then it – like life – doesn’t stop there.

Just before the above quote, The Only Story starts with these lines:

Right out of the gate we have classic Julian Barnes: a mixing of a deep sense of poignant romanticism – the sense that life, and love, are beautiful and meaningful and pure and unquestionably enough to sustain us – with a very English sense of Absolutely Refusing To Take Any Nonsense.

Barnes has a wonderful way of balancing the romantic and the cynical, and not ending up a boring, bitter old git – taking off the rose-coloured glasses, but not forgetting the beauty that one saw through them. In The Only Story we start with that beauty, and then take off the glasses.

(The rest of this review is light on specific spoilers, but gives away a fair bit about the story as a whole. I’d recommend reading the book before continuing, if you’re at all interested.)

Like The Sense of an Ending and The Noise of Time this is a book about looking back on one’s life. In The Only Story we start with Paul’s youth, and his budding romance with Susan – The Older Woman – and his belief that everything will work out for the best, because that’s what love is, right?

And throughout the book, Barnes does an amazing job of capturing – in intense emotional detail – the various stages of life, and love, and the loss of that love:

That youthful mindset that can be infuriating to the old – the sense that everything will work out for you, and that those older than you are irrelevant, and incapable of understanding something fundamental that you, in fact, understand perfectly.

That disillusionment that comes with entering the real world, and the eternal sunk cost fallacy of work, or obligations, or a slowly souring relationship. Your brain doing anything possible to avoid dealing with a harsh truth that you should have addressed long ago (it’s love, so it must turn out okay, it’s not that big of a deal, it’s just a temporary thing, let’s just ignore it forever) And then that doesn’t work, and everything falls apart.

And then finally, a deliberate hardening of one’s heart. In the face of unbearable heartbreak, isn’t it tempting to avoid being hurt by simply feeling less? Shutting oneself off, and refusing to let love or passion into your life. You’ll miss the highest highs, sure, but you’ll also save yourself from those unbearable lows. And when those lows have been so unbearable – and so prolonged – one can be forgiven for thinking that way.

In many of his recent novels, (and as he approached, and passed seventy) Barnes has shown himself to be a master of summing up the entirety of a life. Not every single story that make up that life, but the vital parts, and the ways they change someone.

And not just those parts as they were in the moment, but in hindsight – looking back over the broad span of one’s life and passing judgement. Remembering the brightness of youth, and the anger or dullness of certain grave errors, and the consequences that continued on and on.

The Only Story may be Barnes’ best work – certainly in this respect I think it is. Let’s hope we get a few more out of him before he’s done.